So what’s the Kawasaki Z300 like now that it’s available? Take a look at the history!

The Ninja 250 was once Kawasaki’s entry point, and the success of the bike has revived the long-dormant small-displacement market. As a result, there was a growing demand for a street bike that was more suited to everyday life and commuting, and so the Z250 was born. As the demand for more power increased, the more powerful Z300 was born, with safety features such as ABS anti-lock brakes and a sliding clutch.

The Z300’s origins, however, are generally considered to lie in the Z 250FT, which was launched in 1979. It was powered by a four-stroke, air-cooled, twin-cylinder 250cc engine with a maximum power of 27 horsepower. The Z 250FT quickly became a popular model for novice motorcyclists because of its outstanding appearance. 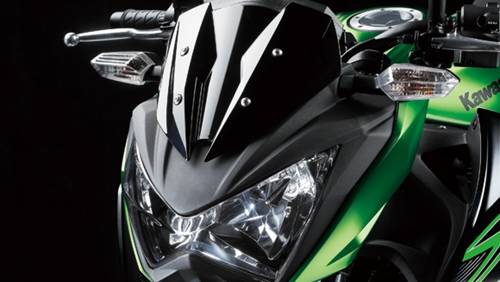 The Z300 headlight: a family feature of Kawasaki’s new generation, with the same butterfly shape as the Z800, making it instantly memorable

All decals are designed with Z’s

The only downside is the lack of a water temperature display and the fact that it only shows the maximum speed of 199km/h. Basically the same gauge as the Ninja 250.

The clutch is a cable-operated clutch. There is a switch for the high and low beams, directional lights and horn.

The overtaking light can be controlled with the index finger, making it even easier to use.

The Z300 is designed for constant lighting, so there is no headlight switch.

There is an engine off switch and an electric start button.

The fuel tank has a capacity of 17 litres.

Before I rode this bike, I thought the Z300 was a half-dressed Ninja 300, but that would be an arbitrary assessment. The similarities in looks, engine and frame aside, you can feel the difference as soon as you step on the bike and the change in ride triangle is very noticeable.

The first thing I felt when I upgraded from the Ninja 250 to the Z300 was that the torque came out earlier, making it easier to ride in the city and the fuller torque made it easier to enter and exit corners in the mountains. At high speeds, the difference in horsepower makes the overall extension of the Z300 even better than the original Shinobi 250.

The sliding clutch is more tolerant of downshifts, so you don’t have to worry if you don’t have enough fuel to fill the gears. But don’t be tempted to deliberately downshift without refuelling just because the clutch won’t lock up. If the speed difference is large enough, downshifting two gears in a row will still cause the rear wheels to lock up due to the speed differential.

The Need of Digital Marketing for Business

These Fantastic Ideas Will Help You Trim Your Figure.

Featured Posts
Should Era Variations matter in Dating?
8 hours ago

Gender Specialist and Clinical Psychologist Dr. Shannon Chavez Teaches Partners How to Do Have More Rewarding Intercourse Resides
15 hours ago